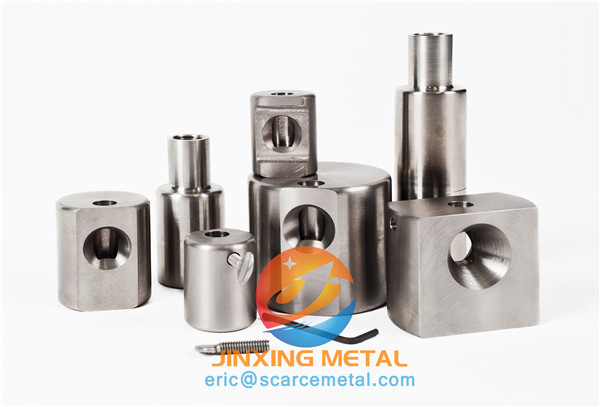 What is Tungsten Alloy Collimator?

In neutron, X-ray and gamma ray optics, a collimator is a device that filters a stream of rays so that only those traveling parallel to a specified direction are allowed through. Tungsten alloy collimator is used in neutron, X-ray, and gamma-ray optics because it is not yet possible to focus radiation with such short wavelengths into an image through the use of lenses as is routine with electromagnetic radiation at optical or near-optical wavelengths. Tungsten alloy collimator is also used with radiation detectors in nuclear power stations for monitoring sources of radioactivity.

For industrial radiography using gamma radiation sources such as Iridium-192 or Cobalt-60, a collimator allows the radiographer to control the exposure of radiation to expose a film and create a radiographic "negative", a.k.a., a radiograph, to inspect materials for defects. A collimator in this instance is most commonly made out of tungsten, and is rated according to how many half value layers it contains, i.e., how many times it reduces undesirable radiation by half. For instance, the thinnest walls on the sides of a 4 HVL tungsten collimator 0.52" thick will reduce the intensity of radiation passing through them by 88.5%. The shape of tungsten alloy collimator allow the radiographer to direct the radiation to the film and away from other workers.

Therefore, tungsten alloy collimator is widely used in linear accelerators used for radiotherapy treatments. They help to shape the beam of radiation emerging from the machine, they can limit the maximum field size of a beam. The treatment head of a linear accelerator consists of both a primary and secondary collimator. The primary collimator is positioned after the electron beam has reached a vertical orientation. When using photons, it is placed after the beam has passed through the X-ray target. The secondary collimator is positioned after either a flattening filter (for photon therapy) or a scattering foil (for electron therapy). The secondary tungsten alloy collimator consist of two jaws which can be moved to either enlarge or minimize the size of the treatment field.